skip to main | skip to sidebar

In Muhamamd Abduh I noted that Muhammad Abduh was reported to have issued a fatwa allowing prayer with shoes on, and himself to have prayed with his shoes on, and said that the explanation of this was unknown (pp. 101, 114). An explanation is now indicated, thanks to Thomas Eich, who drew my attention to M.J. Kister's article, "'Do not Assimilate Yourselves...' Lâ tashabbahû...," Jerusalem Studies in Arabic and Islam 12 (1989), pp. 321-353.

According to Kister, the general practice of removing shoes before prayer is a development that may be dated to as late as the seventh/thirteenth century (p. 346). There are numerous hadith on the issue of whether or not shoes should be removed for prayer, pointing both ways. In Kister's view, the original logic was the since the Jews of Arabia removed their shoes to pray, Muslims should not; this was part of a general trend towards encouraging differences in behavior between Muslims on the one hand and Jews and Christians, whose religions were understood to have been abrogated, on the other hand (pp. 336-40). The practice of wearing shoes for prayer later changed, however, as "a result of the significant changes in the social and material conditions of life," notably the building of elaborate mosques with floors covered with carpets (pp. 346-47), which had not existed in Arabia at the time of the Prophet. Shoes are not good for carpets. Kister's analysis is convincing.

Evidently, Muhammad Abduh was aware of the discussion that Kister has analyzed. There would then be two possible reasons for him to revert to the earlier practice of prayer wearing shoes. He might simply have decided that prayer wearing shoes was the practice of the Prophet and his immediate followers, but this is unlikely, since there are no other known examples of such a decision based purely on such grounds. Alternatively--and this is more in character--he might have decided that a practice of the Muslims that was at variance with the practices of Europe did not, in fact, have any real justification, and so could be abandoned.

Posted by Mark Sedgwick at 10:00 AM No comments:

Why Muhammad Abduh came to be called "Salafi"

In a new article (“The Construction of Salafiyya: Reconsidering Salafism from the Perspective of Conceptual History,” International Journal of Middle East Studies 42, August 2010, pp. 369-389), Henri Lauzière reviews the history of the use of the term "salafi," and shows how it became attached to Muhammad Abduh, after his death, as the result of its adoption as a business name by a successful Cairo bookstore and publisher. The use of "Salafiyya" by this publisher in the title of a short-lived modernist journal discussed by Massignon as an example of modernism caused confusion among Western scholars, and the adoption--years after Abduh's death--to describe modernism.

An excellent article that clears up almost 90 years of confusion!
Posted by Mark Sedgwick at 5:24 PM No comments:

Thanks to Dietrich Jung for bringing to my attention Ignaz Goldziher's recollections of Afghani, with whom he spent time during his four-month visit to Cairo as a young man in 1873/74. Goldziher described Afghani as "the most original figure among [his] friends" in Cairo. He joined Afghani frequently in the coffee house in Abdin Street where Afghani "presided every evening over a group of young Azhar students and taught them all sorts of free-thinking stuff (ihnen alles mögliche freisinnige Zeug vormachte)" (Tagebuch, Leiden: Brill 1978, p. 68).

Goldziher wrote that he met Afghani again in Paris in 1883, and should one day write more about this. but apart from an entry in the Encyclopedia of Islam, seems not to have done so.
Posted by Mark Sedgwick at 12:27 PM No comments: 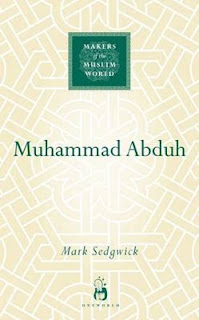 The worldwide edition of Mark Sedgwick's biography of Muhammad Abduh is to be published by Oneworld, Oxford, on November 18 2009.

A Middle East edition will be published at about the same time by the American University in Cairo Press, Cairo.

The differences between the two editions are minor. The main difference is that the AUC Press edition, which is not on sale outside the Middle East, is priced at a level that makes it more easily available to readers in Muhammad Abduh's own country.

The worldwide edition is available for $36 from Amazon.com and for £28.50 from Amazon.co.uk.
Posted by Mark Sedgwick at 1:19 PM No comments:

Posts for this blog should be submitted as a comment here. The comment will then be emailed to the moderator, who will make any stylistic edits that are needed and then convert the comment into the post.
Posted by Mark Sedgwick at 1:25 PM 1 comment:

This blog was established in November 2009 to coincide with the publication of a new biography of Muhammad Abduh by Mark Sedgwick.

The blog serves two purposes:
(1) To provide updates related to the biography.
(2) As a forum for scholars working on Muhammad Abduh or on issues related to him.